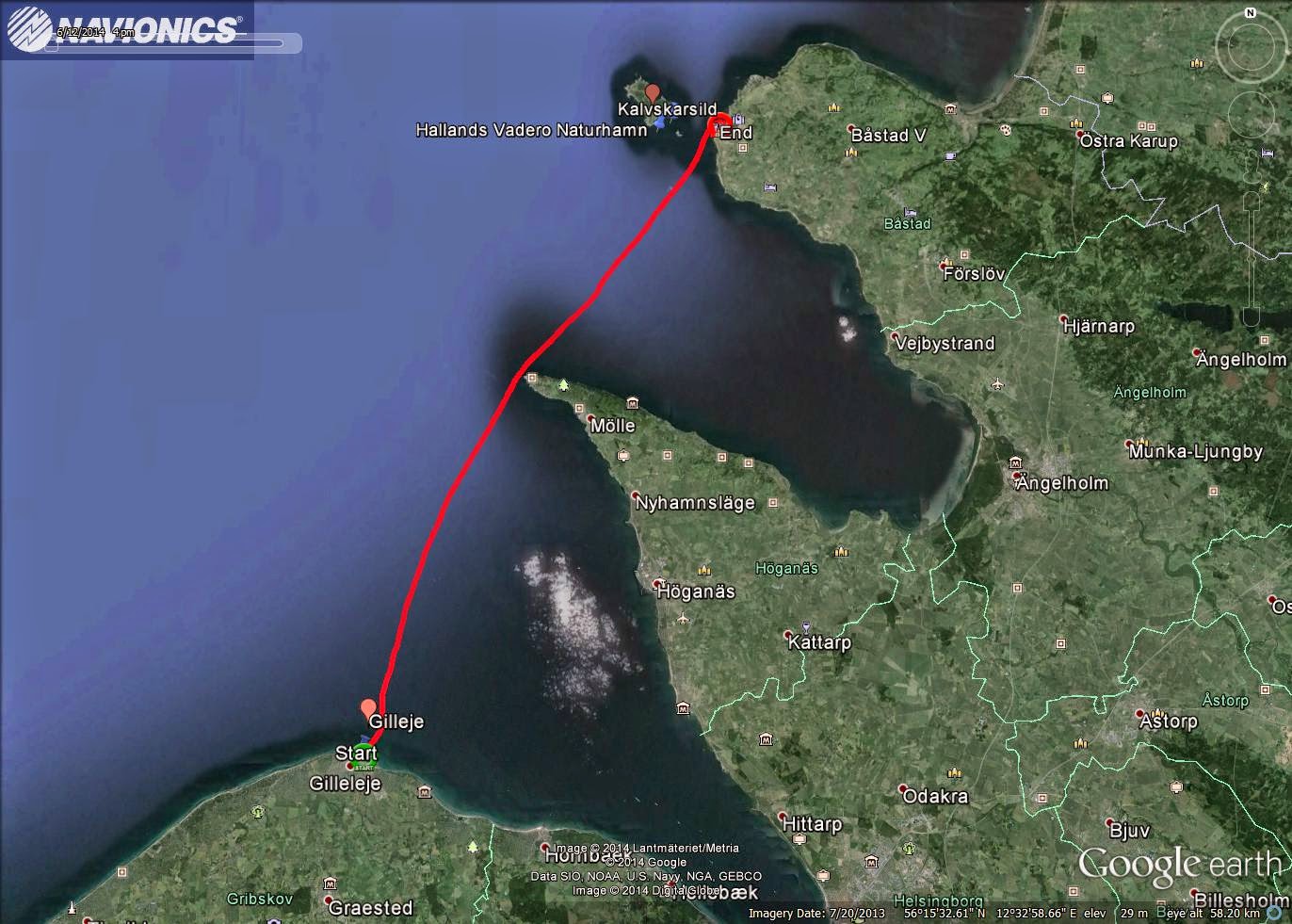 This leg of the cruise was the one I had the most concerns. It was an open sea with few ports of refuge. The SE wind had a long fetch through the Sound. A shipping lane with obvious dangers for small craft, being seen etc.
In light of experience from the previous day I made more preparations for a long cruise. Prepared sandwiches and had other munchies and drink to hand. Donned waterproofs believing that it is easier to take them off rather than trying to put them on underway. Put a reef in the mainsail, again easier to do in port than under way,
Left Gilleleje at 09:45 hours and because of a lack of wind shook out the reef in the mainsail. The initial feeling were that this was going to be relatively easy passage but the weather did look unpredictable.
At 6 miles out the wind speed increased and the wave height increased. the boats motion was particularly uncomfortable with the sea on the starboard quarter. The boat speed was averaging about 5 to 6 knots and I was becoming concerned that we might broach. My fears were confirmed when a gust and wave heeled the boat over to the port pushing the gunwale under. A large bucketful of water slopped down into the cockpit well. I was quickly able to right the boat and resume my course.
I was relatively happy continuing my course but needed to reduce sail and so therefore there was nothing for it but to head into the wind and put a reef into the mainsail. I dropped the main to my one and only reefing point and clipped the mainsheet to the reefing point and keeping the mainsheet tackle attached to the clew. I did not feel tying the 6 or 7 reefing points and so I continued sailing with the bottom flapping like a duvet cover. It may not have been pretty or seamanlike but I was confident that it was safe and I had effectively reduced the sail area. The photograph below was taken after we had rounded Kullen point and the sea state had reduced or is it the case that one's memories of that day have already changed.

The reduced sail certainly made the boat more manageable but the speed had not reduced much below 5 knots. I rounded Kullen point at about 13:30 hours. In the lee of the point the sea state improved and the wind reduced. I was able to tidy up the reefed mainsail and make it look a bit more seamanlike. I was also able to grab something to eat and drink. I put the Autohelm on for the first time.to give me a rest. 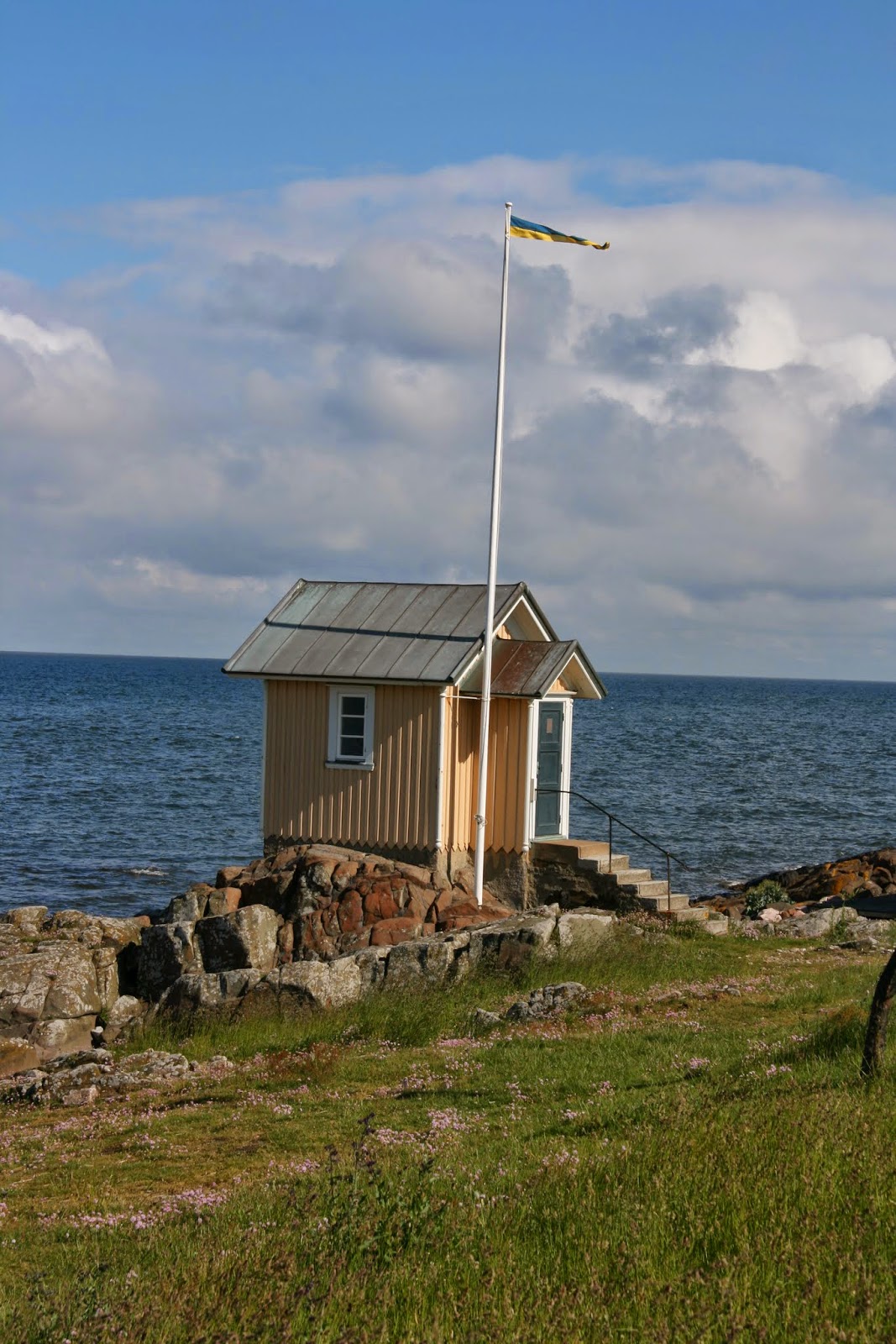 Continued on passage bound for an anchorage on Hallands Vadero an island off the coast close to the port of Torekov. The sea state and wind increased again and arrived at Torekov at 15:30 hours. There were a number of the fleet who wanted to continue on but I had had enough as I had been sailing single handed for about 6 hours in what I considered quite rough conditions.
There had been one Drifter 22 not make the destination due to a broken rudder. He had made for Molle on the Kullen peninsula with 2 coasters who had stayed with him for support. He had made this refuge by steering with his outboard. 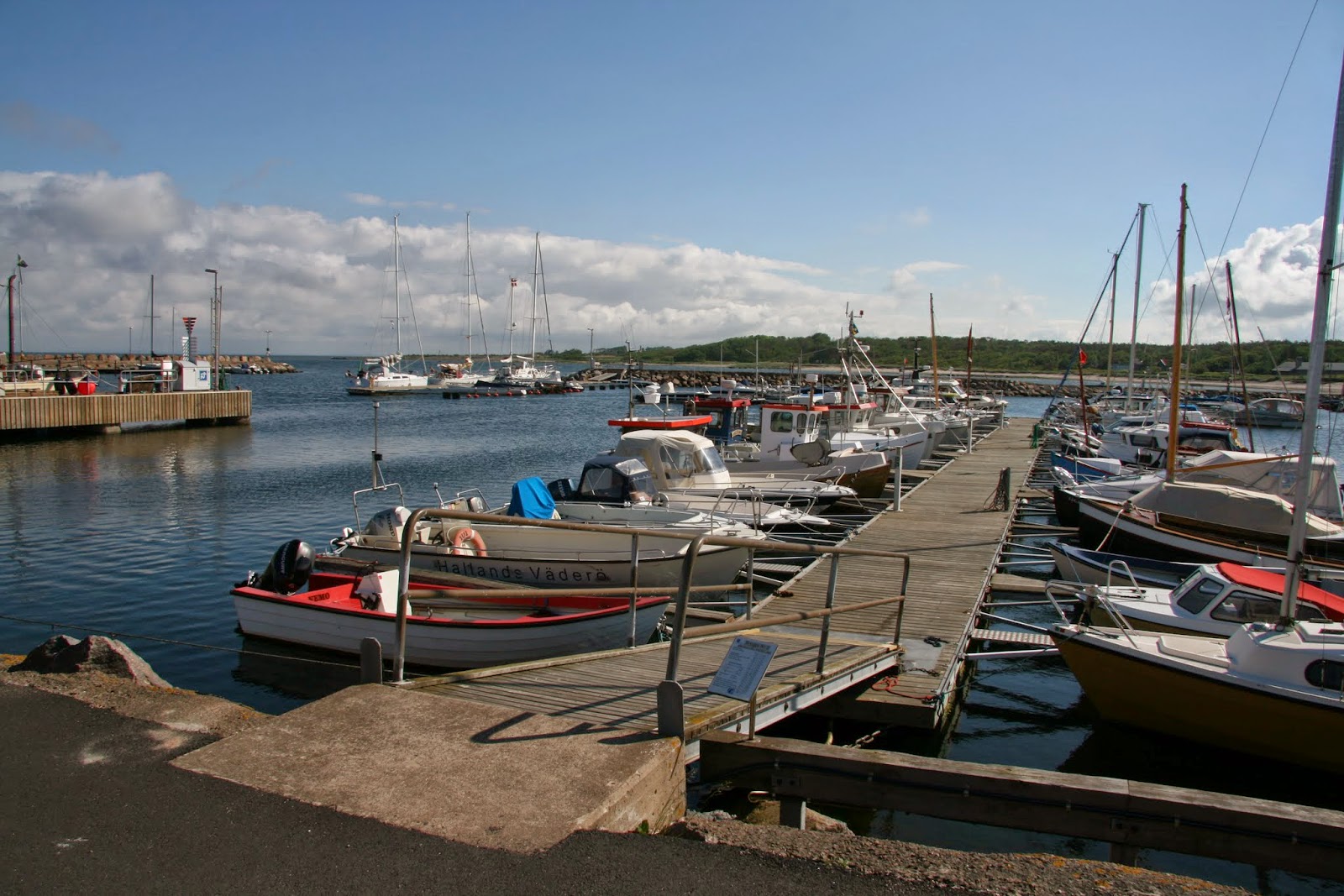 I was congratulated later for completing the passage as the only single crewed Coaster the smallest type of boat in the fleet.
Torekov is an old fishing village but is now mostly occupied as second homes by wealthy swedes from Malmo and Gothenburg. All the houses are in excellent condition and as throughout scandinavia great pride is placed in flying their national flag from their properties. I took an early morning walk and found a few of the locals taking an early morning dip in the sea from purpose made bathing platforms. You would see people dressed in fluffy white dressing gowns making their way to the beach on bicycle. 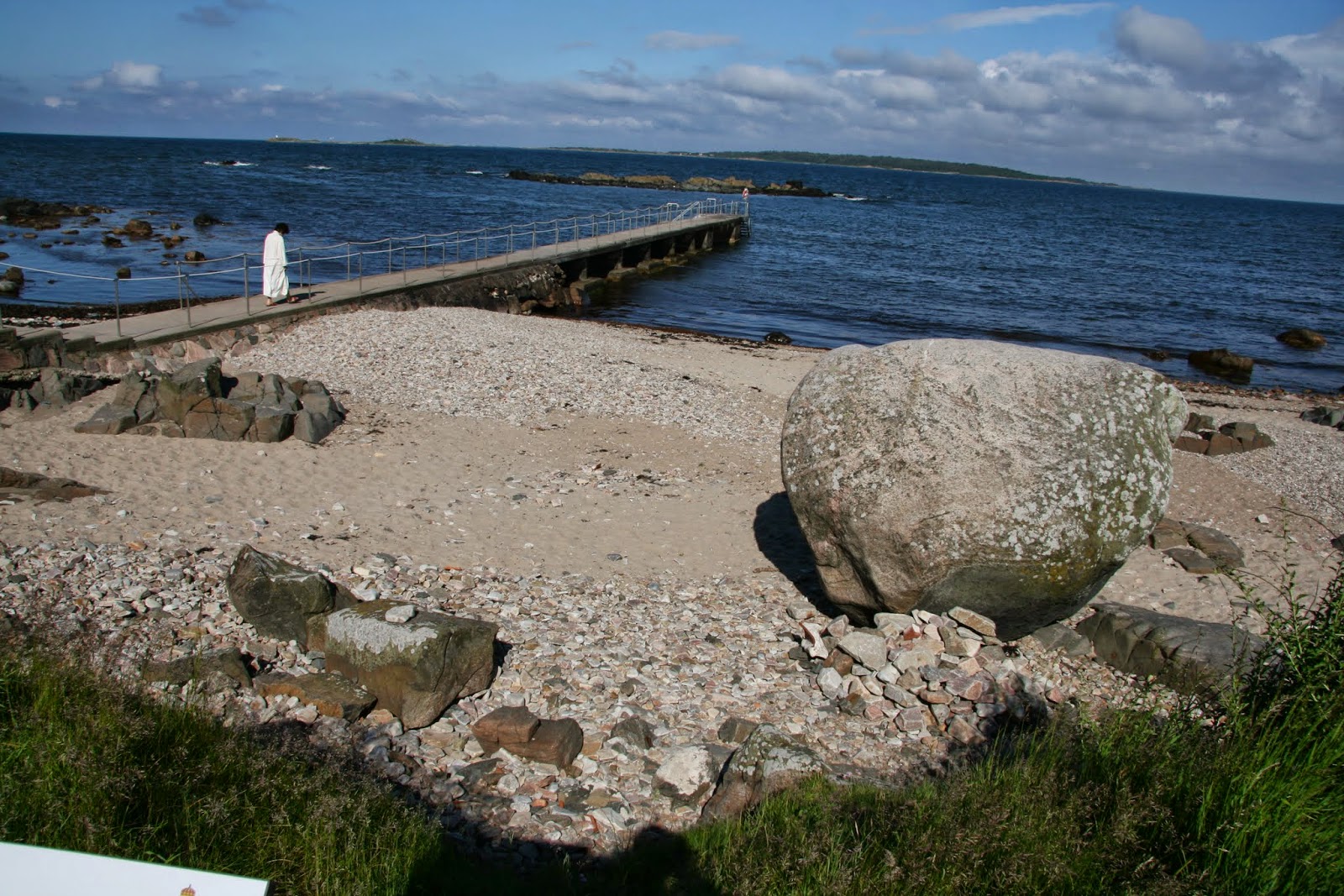 Local legend that a Danish  Queen wished to murder her step children and so she organised a sea journey in a leaky and unseaworthy ship. The ship was wrecked close to Torekov and one of the  children was washed ashore and were found by the large rock in the picture above.According to an old legend, the town is named after the girl later known as Saint Thora, found on the shore of Torekov. the other two children were washed ashore at Gilleleje and Arilda. However, the more prosaic explanation refers to two old words thora meaning height, and kove meaning cabin or hut. 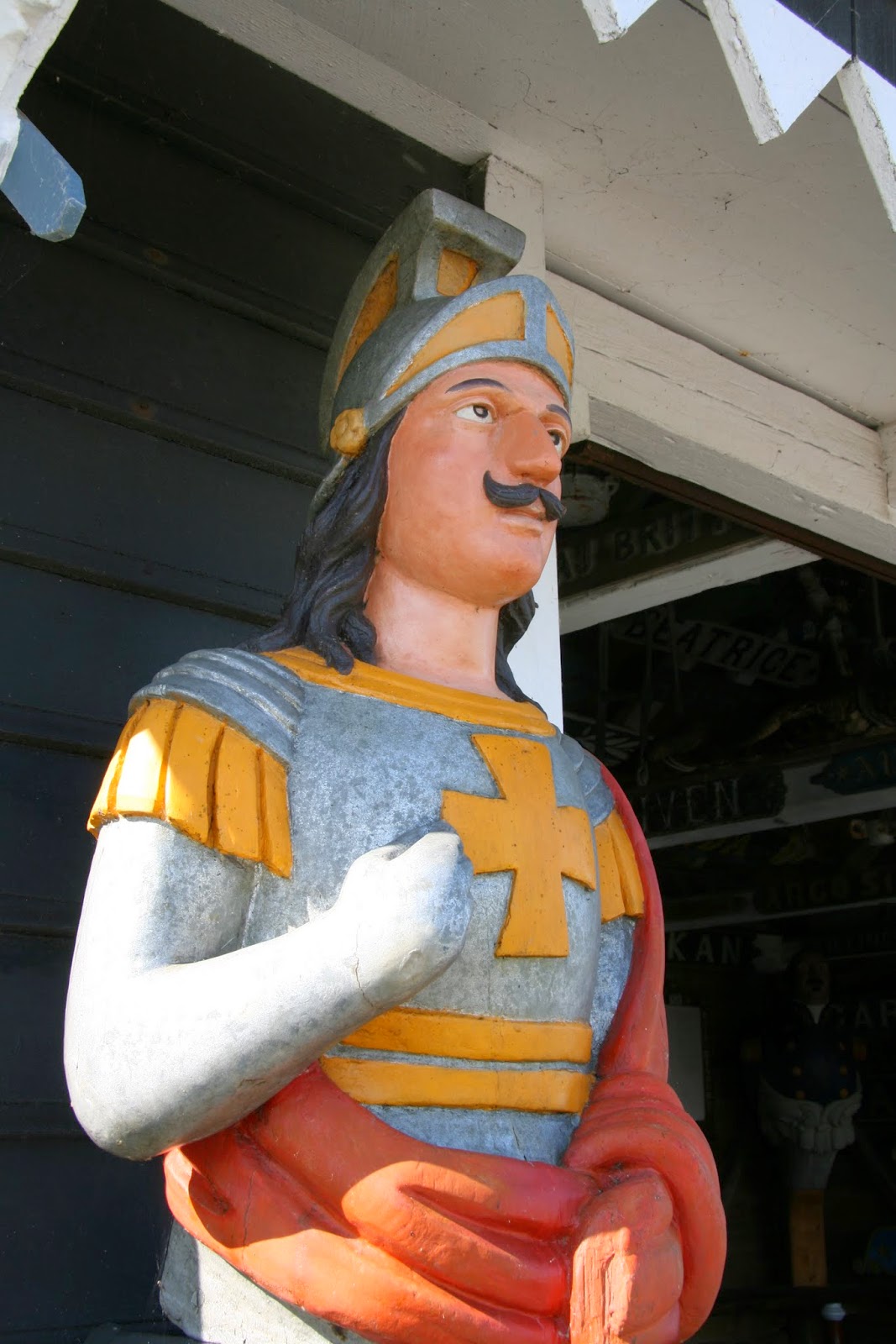 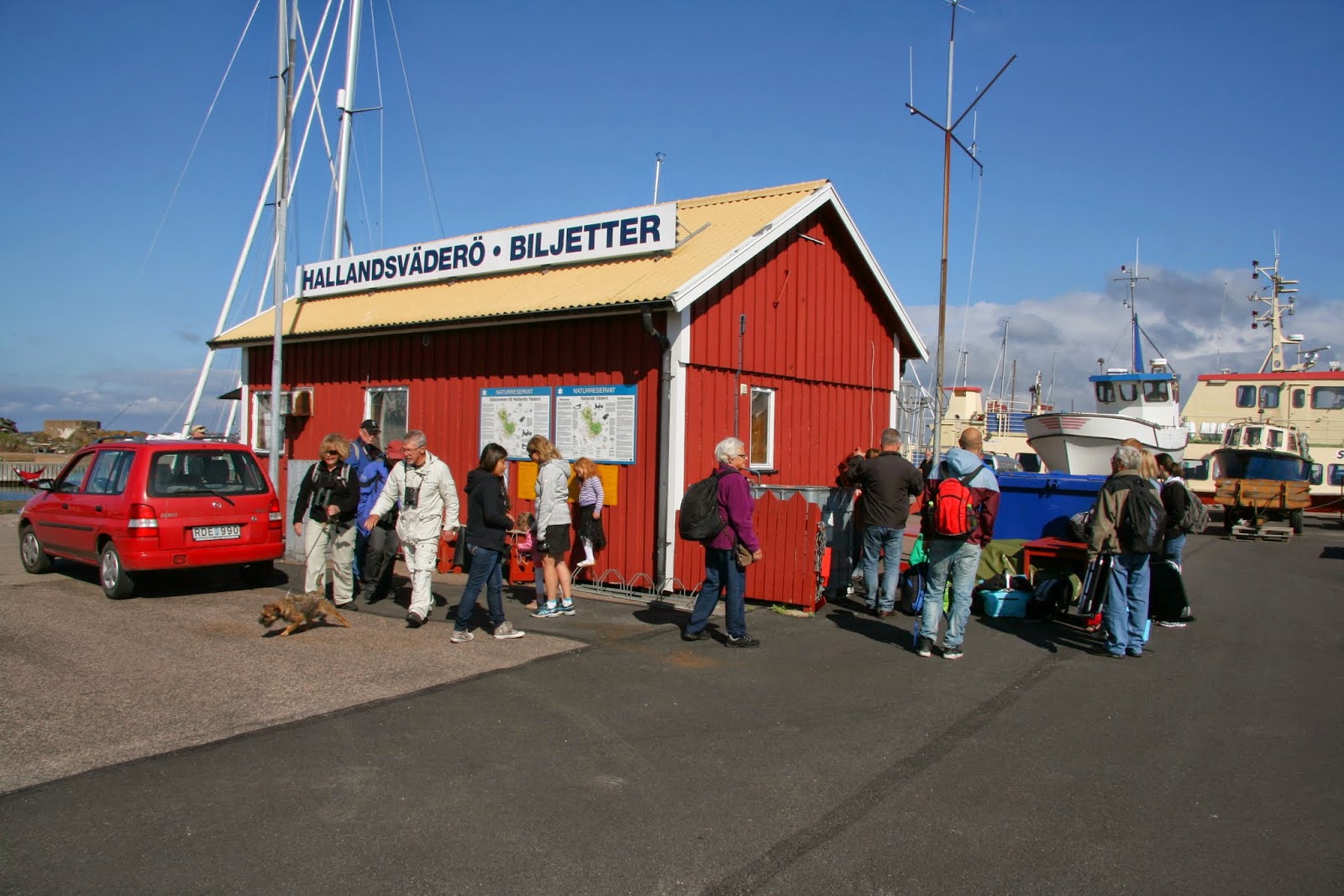 The Hallands Vadro island nature reserve is a local tourist attraction with daily ferry trips to the island. The island contains some of the oldest oaks in Sweden and was once the hunting grounds of Danish Kings..The island was permanently occupied but there are only the remaining houses rented out as holiday lets.

According to one of the local yachtsmen we had travelled the most difficult part of the voyage crossing from Denmark and around the Kullen peninsula. The rest of the journey to Oslo would be more straightforward.