This is not a definitive guide to servicing an outboard but only an account of my experiences. If you have any doubts or queries please consult a qualified Honda service engineer. No liability will be accepted for anything contained in this account.

I decided this year to extend my skills and service the outboard myself. I purchased on E-Bay a Honda Service kit without oil at a cost of £28.75 plus postage of £2.70 from a company called Marine Tech based in Norwich. Delivery was prompt and a small brown cardboard box arrived in the Royal Mail post. Marine Tech in their E-Bay ad offered to send an E-Mail with a copy of the workshop manual. This proved to be very useful as it gave simple explanations as to how to carry out the service. No special tools were required and the only spanner I used was a 10mm socket. A large flat tipped screwdriver was also useful to undo the gearbox filler and drainage screws.

I first of all drained the engine oil so that I would not have the problem of engine oil getting into parts of engine whilst tipping the motor about.

The biggest job was the renewal of the water pump which required the dismantling of the gearbox from the outboard leg.The first task was to undo the gear connecting rod which was accessed through a rubber plug in the side of the leg. The gearbox was secured by two bolts which came undone easily and the gearbox dropped easily off the outboard leg. I think I was lucky in that the motor had previously been well maintained and the bolts were lubricated and not seized. The next task was to dismantle the water pump housing and pull off the gearbox drive shaft. The shaft was loose and slightly spring loaded so that it would connect with the drive shaft in the leg. I removed the rubber pump vane which appeared to be in good condition after two seasons although the rubber vanes had adopted the shape of the pump housing and some of the arms were permanently bent.. I have been told that lack of use can also be a disadvantage to the life of pump impellers. The received thinking is that they should be replaced at the annual service. I then reassembled the impeller and the housing ensuring that the impeller vanes are pointing away from the direction of rotation. I replaced the gaskets with ones from the service kit. The manual gives torque settings for all the bolts and I took care to make sure they were tightened correctly.

Whilst I had the gearbox off the motor I took the opportunity to remove the propeller and take off some the worst burrs with a file. Grease the shaft and replace the prop and renew with the supplied split pin. I then drained the gearbox oil and refilled.

I apolgise for the lack of photographs but the next task was the most difficult. I laid the motor on it's side on the work bench with the aim of refitting the gearbox onto leg. There are three items which you need to connect all at once and they are the water feed pipe to the engine, the drive shaft and the gearbox connecting rod. The first thing to do is to ensure that the square drive shaft is aligned with the square socket of the drive shaft. I became concerned when the drive shaft dropped out of the leg. The upper end is a splined shaft which mates with motor at the top end of the shaft. I managed to reconnect the shaft with the motor unseen by carefully pushing the shaft up and locating the splined shaft of the motor. After about 15minutes of fiddling the gearbox and the 3 components slid together. Turning the prop rotated the flywheel and so they were properly connected. The sealing ring of the water feed pipe was properly in place. I tightened the gearbox linkage and ensured that the correct amount of travel was in place using a micrometer.

The next task was to move to the top of the engine and check the valve gap settings. Removed the spark plug. In line with the manual the valve gaps were in tolerance. I had removed the cover taking care not to break the gasket as no replacement was in the kit.

Replaced the spark plug wit a new one from the kit. 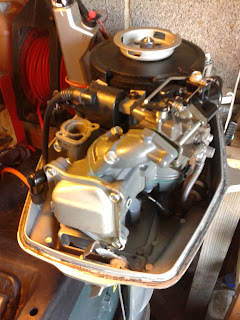 A gasket for the thermostat housing was included in the kit but no thermostat. There was little explanation as to why it needed to be checked other that how to check that it was operating properly. I removed the cover and got a bit of a shock. The exterior of the engine was in good condition as you can see. The removal of the cover revealed a corroded thermostat with accumulation of sale, corrosion and weed. The thermostat itself was in the open position and so was defective. I had not noticed that the engine was slow to warm up. This exercise did emphasize the value of flushing the motor at every opportunity with fresh water. A new thermostat cost £23.40 from a local chandlery. 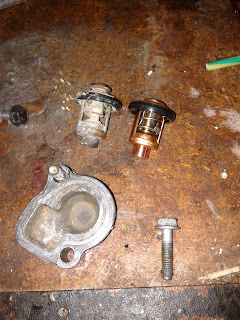 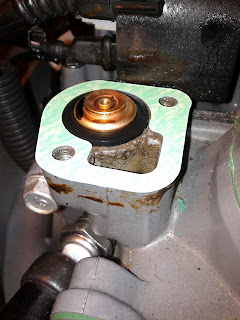 I then greased the points as described in the manual.

Tested the motor today. good healthy flow from the tell tale, forward and reverse work. All in order. I have gained a greater understanding of the workings of the motor.
Posted by Ian Cowie at 10:42