They're a hardy lot Drascombers. This was proved by the large attendance figures at this year's
Chichester Rally. Held over the early bank holiday weekend in May and based in Chichester Marina, (1 Drifter 22, 3 original Drifters, 15 Coasters, 1 Gig, 2 Long Boat Cruisers, 1 Long Boat, 5 Luggers, 1 Scaffie and, er… hmm, 1 Cornish Shrimper) - 30 boats, in total, took part with over 50 skippers, crew and visitors attending, with some new faces and new boats. 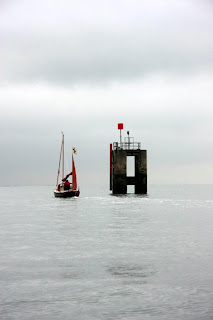 Passage through the submarine barrier at Portsmouth. 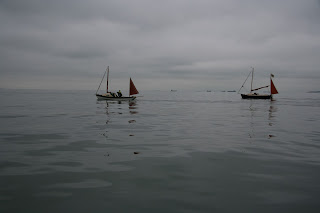 We left Ashlett Creek at 1115 hours on the Thursday 3rd May. We had to get past the last of the west going tide before the tide turned in out favour at about 1400 hours. The wind was predicted to be Force 3-4 variable. When we entered Southampton Water the wind was blowing at about 12 kts from the NE and so we were able to attain a speed of about 5kts. But when we came into the lee of the land the wind speed dropped and so did our speed. We reached about Lee on Solent when one by one we turned our motors on. We congregated at Gilkicker point into a bunch in order to negotiate the busy sea lane outside Portsmouth Harbour. We passed without incident and the only ferry passed us by well astern. The rest of the journey was plain sailing and we entered Chichester Harbour at the last of the ebb.
we joined the rest of the fleet who arrived over the next 2 days. 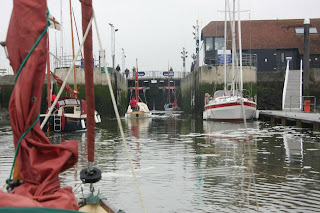 Feeder cruise arriving at and in Chichester Marina Lock Photos - Andy Cooper
Friday, itself, was grey, cloudy and cold, with a few showers but undeterred boats were launched and tents erected, not only on boats but also in a field adjacent to the marina.
A welcome dinner was held in Chichester Yacht Club and Roger and Anita Whiffen shared their Golden Wedding celebrations with us, providing a lovely cake.
Saturday’s weather was more of the same and the original plan for a shakedown sail followed by a rendezvous in Bosham were amended once out on the water with many of the fleet taking up the offer of food, drink and, most of all, warm shelter at Dell Quay Sailing Club.
It remained cloudy and grey, but largely dry for the remainder of the day and in spite of the
elements the evening saw the barbeque in full swing, using the now familiar ladder rack system.
Stewart Brown presented the Churchouse Boats trophy to Roger and Anita Whiffen in recognition of their long association, over 30 years, and boundless enthusiasm for Drascombing exemplifying the spirit of the Association. 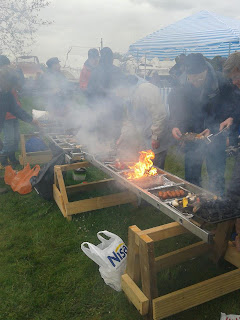 The Ladder Rack BBQ Photo – Andy Cooper
Roger and Anita with Stewart Brown presenting the Churchouse Boats Trophy Photo – Andy Cooper
Happy Anniversary – Roger and Anita Photo – Andy Cooper
John Christie, who had travelled down for the day, then made a speech and presentation of the Hans Vandersmissen award to Jim Hopwood.
The band played on and the singing and merriment went on until the barbeques finally stopped giving out any heat. Several different parties started on various boats and the carousing continued until the early hours. Indeed I was quite surprised to see some faces at the briefing the next morning...
Sunday was also grey, cloudy and cold, but many boats went out, including the Southampton fleet who headed to Cowes to catch the tide into Ashlett the following day. Once again for those remaining in the harbour, Dell Quay Sailing Club proved a useful stop over. Others took the opportunity to walk in the surrounding countryside.
During the afternoon there was a steady trickle of departures as skippers and crew decided to beat the Bank Holiday traffic.
Monday started with rain but it soon dried up and the sun came out and it was warm with a good breeze, making it the best day of recent weeks. Two stalwart Lugger skippers, Robin Carter and Ross Archer, together with their crews, explored Bosham quay and adjacent roads that were under water due to the height of the tide.
By 6.00 pm all the last of the fleet had departed on the journey home.
The weather had been poor and could easily have put a huge dampener on the whole event, but the people who came along all pulled together to make it a very satisfying and enjoyable event so my thanks to all of them and, next year, I'll book the weather. 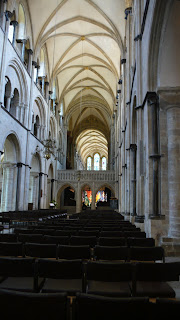 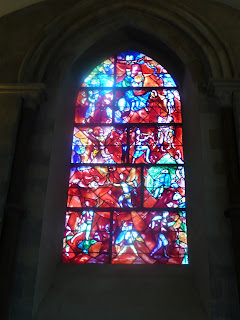 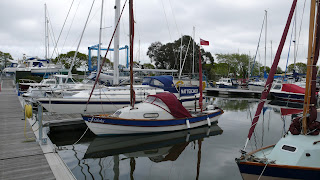