Took the cover off the boat as the weather was fine and warm.

The jamb cleat for the jib sheets was in efficient and had the annoying habit of un jambing at the most inconvenient time. So I have adopted the same solution as for the mizzen sheet and installed a Barton Cam Cleat. I have reduced the number of holes I had to drill by utilizing one of the existing ones and turning the cam cleat to the right angle. The one remaining hole I plan to fill with a bolt. 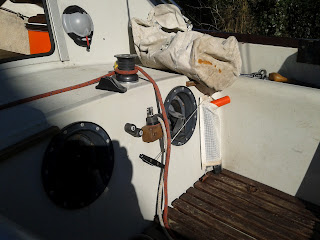 The other problem which was identified on the last trip out was that the starboard jib sheet track was loose at the forward end. When I removed the bolt I found that it was screwed directly into the GRP and that the thread had been ripped out. I also found that the second and third screw were loose. I have removed the screws and looking for a solution. I have not as yet removed the track completely as the remaining screws and bolts are fixed tight and they screw into a portion of the deck over a buoyancy chamber. The loose screws are over a locker in the bridge deck which is accessible from the cabin. I am looking for a solution, considering a plug of some kind or to drill right through into the locker and secure with a bolt with penny washers. I will keep you posted. 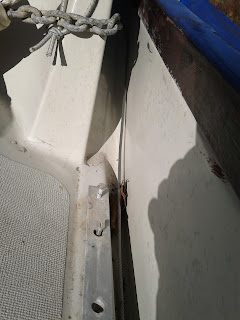