Friday 1st July 2011 drove down from Bristol to the annual Poole Rally which this year had been moved forward from the usual August Bank Holiday. This allowed me to attend as it was away from the annual family commitments at that time of the year. The last Poole Rally that I attended was at Hamworthy. The harbour is one of the finest in the world with its collection of islands, river estuaries and wildlife. I would have liked to have made a passage to Poole in order to make more use of the capabilities of the boat and the fine weather we were experiencing but because of the lack of time I reverted to Plan B which was to launch at Redcliffe Farm campsite.
I arrived at about 04:30pm on the Friday to find the tide was falling fast, but there was still sufficient water to launch. With the help of a couple with a motor boat I launched without a problem into the River Frome and also noticed that a number of other Drascombers had already launched and their cars and trailers were in the car park.
I set off down the river with the centre plate half down, occasionally dragging in the mud. With the help of the depth sounder and the chart plotter I found the deepest part of the channel. I know good seamanship, common sense should keep you in deep water but electronic navigation aids do place a lot of information at your fingertips. I have found my Garmin 451 a great aid in providing accurate tidal information in the cockpit rather than leafing through an almanac and working out tidal differences. This of course does not preclude good planning.
Once in the estuary the beauty of Poole Harbour came to the fore, with a seal seen in the entrance to the river searching for fish. It's head just looked like a football or floating marker buoy. I motored into Arne Bay amongst the drying mud banks with the sound of oyster catchers trilling into the sky. I was alone except for the occasional fisherman.
This is what Drasombing is all about. Leaving nothing behind you but a slight ripple as wake.
I continued to motor as the wind was light and on the nose. I approached the moorings at Hamworthy and found a fairway through into the main part of the Harbour. I used a chart to find a stake marked channel to Pottery Pier off the western end of Brownsea Island. The tide was still falling but I calculated I would still have enough depth to navigate the channel and find a way around the island into Blood Alley Lake where the Drascombe Fleet was assembling. They were moored in one large raft anchored approximately 100 yards from the shore. I made three attempts to come alongside but there was a strong tidal stream with an adverse wind which made coming alongside very difficult and so decided it was better to anchor off on my own rather than display my poor seamanship and maybe appear to be anti- social in not joining the raft. 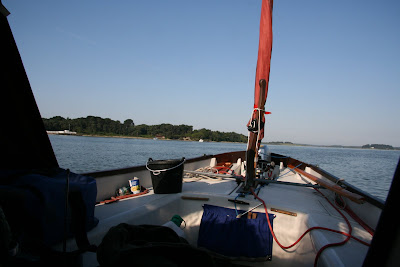 After cooking myself some dinner I settled down for the night.
On Saturday 2nd July I awoke to the sound of seabirds and in particular the sound of Oyster Catchers. We were a few yards from Brownsea Island and you could see the Scout camp. A few Drascombers used their tenders to use the facilities on shore. The plan was to be self sufficient for the whole weekend. The tide was close to low water and I suspected that I had been aground overnight. I lifted the keel plate and Moksha swung around to face the flood tide.
I had thought about bringing my inflatable dinghy but had decided quite rightly that it would have been a drag oon the boat and hindered it's sailing.
Drascombe time applied and it must have been nearly 11:00 hours before the raft broke up and we made for the entrance for a sail to Studland Bay. I kept the engine running to negotiate the busy harbour entrance. A combination of the chain ferry, Brittany Ferry "Barfleur" and other boats was not a location to be under sail alone. The wind was coming from the west and therefore was not favourable. Stewart Brown, the rally organiser, advised to keep going until you ran out port hand mark buoys in the fairway.
In the fairway traffic was heavy with assorted power boats, ribs and sailing craft making out of the harbour for the day and most of them heading for Studland. A large "Gin Palace" power boat overtook me in the fairway coming within 10 yards of me and certainly did not appear to understand the collision regulations, i.e the need to keep clear when overtaking. Power craft seem to have little understanding of the effect of their wash on smaller boats. I do not know how many small boats have been swamped by such large craft and I am sure that plenty have been given an uncomfortable time for a few seconds.
Three ribs from the Royal Marine Boat Squadron overtook at high speed with passengers in civilain clothes. It looked like a day's "jolly" for a few lucky friends and family. The ribs passed by at such a speed that they did not create a great deal of wash and I got a friendly wave from the helmsman of one of the ribs. This did give a good impression and acknowledged your existence rather than my previous experience with the motor yacht.
We sailed into open water and I set all the sails. Moksha sailed on a beam reach towards Studland at a steady 3.5 knots. I turned about a couple of times to enjoy sailing on this beautiful day with a light but steady breeze. Visibility was reasonable with the Isle of Wight and the Needles just visible. The fleet of approx 20 boats were visible all around the horizon.I later discovered that there was a Cornish Shrimper rally in Studland also and so there were plenty of tan sails to be seen. The Marines were playing in their ribs creating a lot of wash and excitement for their civilian passengers. They were far away and did not cause any problem to us sedate Drascombes. 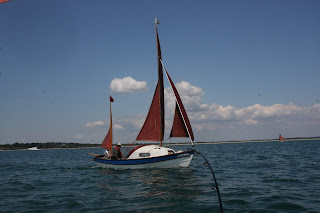 We all anchored as a raft in Studland for launch although we were not too comfortable with the swell, which did knock us together a little bit. At about 15:30 hours we set off back to Poole downwind. An hour of flapping sails and attempting to goose wing we got there. The tide in the entrance was on the ebb and there appeared to be a good 4 or 5 knots of tide. I furled all the sails and opened the throttle of the outboard and achieved a good 2 to 3 knots of headway. I was pleased with the performance of the Honda BF5. The rudder was hard to handle in the stream and you needed a certain amount of concentration to prevent a collision with everybody else in the Channel and always keeping an eye on the chain ferry to see when they were going to cross next.
We returned to Blood Alley Lake and I again anchored off the main raft to enjoy some privacy and not to have the hassle of mooring ropes and squeaking fenders. Dick Pizey was kind enough to collect me in an inflatable and bring me to the main raft for the community singing.
I awoke at about 0500 hours on Sunday morning to find Moksha at a strange angle. I looked out to find the boat was aground. I went back to sleep and woke later at 07:00 to find that we were afloat again. Strange tides in Poole.
Drascombe time applied again and it was after 10:00hours that the raft split up again. It was just as well as there was a decent height of tide to sail around the island of Furzey and Green Island. The winds were light but sufficient to sail the whole way. The Garmin chart plotter gave me a tide profile with which I was able to calculate the depths for passages between the islands. I sailed around a private island with a draft of less than a metre. With the depth sounder and the chart plotter I was able to keep in the deepest part of the channel.
We stopped for lunch near Spitsall Point close to the shaly cliff of lovely colours of red and orange.
Mid afternoon what remained of the fleet split up to go home. Some had already left to make the passage back to the Solent. The wind had died away and so four of us motored up the River Frome back to Redcliffe. We tried hard not to arrive back at the same time.
Recovery was straightforward and all too quickly the boat was packed up and ready for the road. Goodbyes were made and a I drove back to Bristol in about two and half hours.
A fine weekend with good weather and making the most of the boat and its accomodation.
Posted by Ian Cowie at 00:05