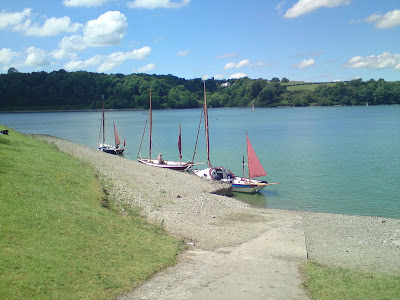 This was a new location for a very small Drascombe Rally. It is a lake owned and run by Welsh Water near to Pontypool.
Llandegfedd Reservoir is a large reservoir north of Newport. It is run as a country park and supports a sailing club and windsurfing school with rescue cover provided by the park wardens. Not surprisingly, with the upkeep of this service there is a charge for sailing on the reservoir, payable as either an annual fee or a day ticket (special rates can be negotiated for groups.)
There are limitaions in that sailing craft are not allowed to use engines and there is a restriction on length to 20 feet. Moksha shrugged her shoulders and managed to convince the warden that she was under 20 feet. She would not be so lucky next time!
Sailing without a motor certainly hones your sailing skills and other than a little difficulty in starting off from the shore we had no problem sailing. A fresh breeze came up in the afternoon and we had enjoyable day achieving speeds of up to 4 knots. There is an active Sailing club with facilities. The launching area is rather restricted for a large boat like a Coaster.
We will go again but probably take a smaller boat such as Topper Topaz.
Posted by Ian Cowie at 00:42