The sailing season has come to an end. The season has a whole has been a poor one for me with a combination of poor weather and other commitments. This final  trip was a cruise in company with the South Coast Sailing Group. This group is an informal group of small boat enthusiasts who in the main sail Drascombes.

The plan was to sail as an informal group with boats coming from Chichester, Warsash and Keyhaven. The intial destination was in actual fact Keyhaven to take advantage of a Curry night at the Keyahven Yacht Club.

To start at the beginning I planned to come down to my yacht club a day earlier in order to get the boat into the water and just generally be with the boat. I arrived at the Club to find that the thieves had visited the club also in the previous week. Talking to other club members I found that at least two outboard motors had been stolen. One from a boat on a mooring and the other from a boat in the pound. My boat had been tampered with but nothing stolen. I had taken the precaution of removing the plastic cover to the outboard which had rendered it less sale-able.

Launched the boat and moored it on the pontoon. The forecast for that night was not good with a F8-9 gale predicted to come through at about 0200 hours which just by chance coincided with HW. At 0200 hours I was awoken by the violent movement of the boat pulling against it's warps. A neighboring boats sail become loose and flapped making it rather difficult to sleep.I looked out and found it raining heavily and with a mist of spray over the creek. I did not get to sleep until about 0400 when the tide fell again.

The next morning a number of my sailing comrades arrived and after lunch in the Social Club we set sail for Keyhaven. The wind was blowing F4-5 from the West and progress was slow to our destination. I put a reef into the main and progress to windward with a wet going tide. I was slowly overtaken by the fleet of Drascombes. I put this down to my caution in keeping the reef in longer than the others and I was probably not as efficient in sailing to windward. I must really put those tell tales on the sails that were bought for me as a birthday present from my son. The weather was poor with heavy rain soaking me and water was streaming off the sails.

At about 1900 hours I reached a point off the Isle of Wight opposite Lymington. The wind strength had fallen. I had taken the reef out of the mainsail some hours before and all sight of my comrades had disappeared. The visibility was not good and the mainland was just disappearing in the gloom. I decided it was time to use the engine as it would not be long before dusk. I furled the sails and I motored at about 7 knots to Keyhaven.

I arrived about 10 minutes after two Longboat Cruisers and I moored on the outside of a raft of Drascombes. I put the cockpit tent up and I retreated to the Yacht Club for my Curry and to dry out. I have found that however efficient your waterproofs are that water seeeps down your neck.

The wind direction had changed to a ENE F3 and so we would see what the sailing prospects were going to be. It had been a wet night with about a gallon of rain water in the cockpit. Water was just over the grating. The sunshine was out with a little cloud. We left at about 0900 hours in order to get the east going tide.

I was the first away and anxious to make better progress in the fleet.

Se sail out of the harbour and past all the moored craft in the long approach. Set the sopping wet mainsail and we set off at a steady 5 knots. I managed a long reach but could not manage a course straight to Cowes. The wind increasingly came from the East and I had to put in a couple of tacks  to reach the Prince Consort buoy. The first turn was at Thorness Bay. Even a turn at the entrance of the Beaulieu river was not enough and had to put in another  tack to reach the Prince Consort. I then furled the sails and motored up the Medina River to Newport town quay.

Sunday morning  was spent in Newport listening to the church bells and reading the Sunday paper. The flotilla was disbanding to various ports as the weekend had effectively come to an end. I decided with a couple of others to extend the weekend a little bit and go on a diversion to Newtown creek. The wind was in the North blowing at a F3. the tide was in our favour and we could get an early west going tide by keeping close to the coast at Egypt point. The sun was shining and I motored slowly the Medina River. Past the Vetus wind turbine factory and the Folly Inn pub.

I set the sails behind the breakwater on the eastern side of the entrance of the Medina River and turned to port to the West. The sail to Newtown was uneventful. Even tried fishing with my new paravane but only caught some seaweed. Anchored at the entrance to Western Haven with another Drascomber. The other two had decided to head east back to their home port of Chichester.

I awoke to find my fellow Drascomber was awake and breakfasted and was ready to set sail. He was anxious to get back to Warsash which is accessible at all states of tides. I had to wait for HW at Ashlet which was approximately at 11:30 hours. The weather was heavily overcast with restrictd visibility down to a mile as I could see the hill on the far side of the creek. The weather forecast gave vis of about half a mile. I decided to sail and rely on the chart plotter and my knowledge of the Solent. The wind was from the NW F3. I set sail at about 11:30 and made good progress in a single beat to Lepe. The wind increased at approx a F5 and so I put in a reef in the main. I then made slow progress to wind ward up the coast towards Calshot. The wind had appeared to increase to the North and so progress was made between the shore and the traffic separation zone. I was anxious not to enter the zone and meet any large shipping. I managed to keep sight of the shore but the visibility had come down to about half a mile. The chart plotter was valuable as it allowed me to keep an exact position of where I was. I know one should not rely on electronic aids but sailing single handed it is not really possible to do proper navigation. I used the depth sounder as well to gauge how close to the shore I could go. The sea state was smooth and the wind strenth had now decreased and I shook the reef out of the sail. I slowly made progress probably in about a dozen tacks and I recognized the features  on the shore as the old barracks and hangers of the seaplane base. I grounded slightly on the spit and quickly raised the plate and sailed out to seaward. I rounded the spit and the visibility lifted and I could sail directly up Southampton Water and past the Coastguard tower. I could now see all the way to the top of Southampton Water. I arrived back at my home port and hauled out. That trip was one of the most challenging and the first time I had encountered poor visibility. There was no safety net of sailing in company with other boats and so it gave me some degree of satisfaction. 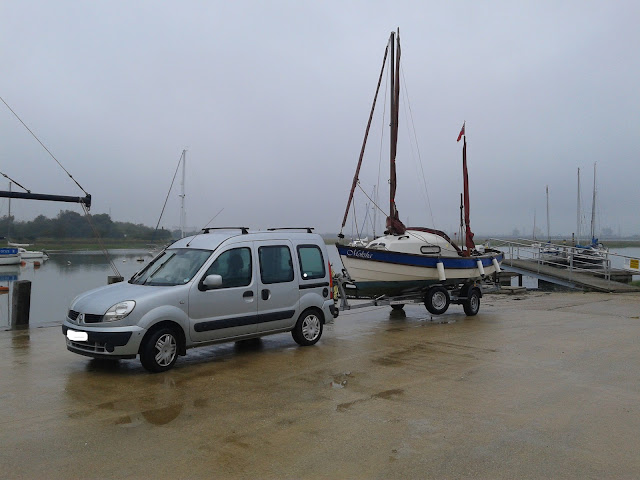