The objective was to cruise with a group of other Drascombes to Poole Harbour and enjoy a few days in the harbour before returning to the Solent. This objective was thwarted by a lack of suitable weather. The pattern seemed to be for a succession of depressions to come in from the Atlantic and so setting up a persistent pattern of westerly prevailing winds of F4 to F7 with heavy rain.

Anyway we arrived the previous day on Wednesday 11th July and launched our boats at Ashlett Sailing Club with a view to catching an early tide at 07:15 hours the following day. The next day a group of 5 boats were assembled and ready to go. The wind was about F3-4 from the West and so we decided to head down the Western Solent towards Keyhaven. The plan was to go to Newtown Creek for lunch. 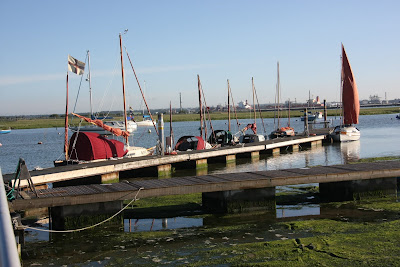 The trip to Newtown was a beat to windward and was achieved in about 5 or 6 tacks. I found it was easier to keep to the island side as the sea was calmer and a little more sheltered. The sea was smoother and it was easier to achieve a more upwind distance. If the sea was rougher you had to bear away to keep up a speed to force your way through the waves. The wind strength was such that I was able to set full main, foresail and mizzen. I arrived at about 1400 hours and joined the rest of the group in a raft in the Shalfleet arm of the creek. The weather had been dry and occasional sunshine. 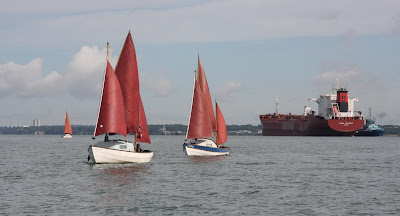 I have now found out that the Honda  BF5  does not have the option of a finer pitched prop which would give more grip in the water and be able to push through heavier seas. The BF5 is supplied with a standard prop suitable for multi purpose use. A saildrive prop is only available on the Honda 8HP upwards. If I was looking for a new engine I would certainly consider this option. But I do not have any cause to critisce the performance of the BF5 yet.

We passed Yarmouth on the port bow and was tempted to take a left turn. But I was not going to make a unilateral decision. We pressed on to our objective of Keyhaven. I had never been out in such wet and windy conditions before on my Drascombe. The boat gave me confidence. The rain and spray soaked me and I watched the spray blowing over the bow and sprayhood on "Gadfly". A Longboat Cruiser came close to colliding with me as the lone helmsman reached down into his cockpit to retrieve something. I caught sight of the boat in the corner of my eye. My view was restricted due to the hood of my waterproof. I quickly did a 360 degree turn which put some distance between him and me.

We turned to starboard to cross to Keyhaven and for a few minutes we got the full force of the wind as we passed into the wind blowing through the narrows. We entered the entrance of Keyhaven and although the sea did smooth out a little the wind strength increased. In the river as we turned to port and the wind blew onto my beam the boat leaned over at a slight angle although we were under bare poles. I increased the throttle slightly to maintain steerage through the trot moorings. We entered an area of shelter behind the harbour wall. We circled the small sheltered area as we waited in turn to moor against the harbour wall. I moored against a Longboat cruiser with the bow into the wind.

As somebody joked "That was character building" 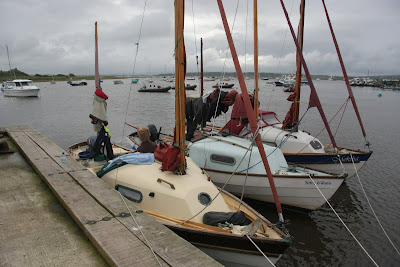 It was agreed that it would be unwise to cross Chistchurch Bay to Poole with the westerly F5-7. The prospect of motoring into a heavy sea was just out of the question. we therefore decided to sail to Cowes which would have been with the wind and the tide.

We left at about 0900hours and it was a run on foresail alone. I averaged about 5-6 knots and we reached Cowes at about 1400hours.We sailed up the Medina River in sunshine, past the Folly Inn and into new waters for me. The river became quite shallow and we eventually moored on the pontoons at Newport which is close to the centre of town. 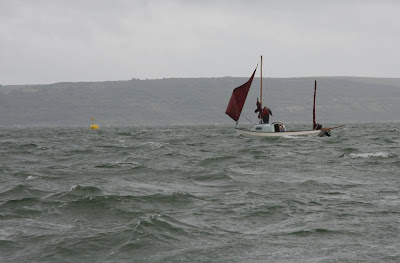