Having thought that the season had come to an end an opportunity arose for a final sail in the Solent. The opportunity  was created as a group of Drascombe enthusiasts were going to sail with Stewart Brown of Churchouse Boats to retrieve a Drifter 22 form it's mooring in Newtown Creek for it's annual refurbishment and winter storage at Stewart's boatyard near Andover.

There appeared to be a weather window in the succession of depressions coming in from the Atlantic and so we trailer ed the boat down from Bristol with our camping trailer so that we could spend some time ashore if the weather turned out bad. The sailing group was going to consist of myself and my crew Bill in Moksha, Martin in his Coaster Nonsuch and the converted Gig Hippo with Jim and Peter. Stewart was going to travel in Hippo for the outward journey. We all met at the Ashlett Sailing Club on Southampton Water and awaited for the tide to fill the muddy creek. At 1330 hours there was sufficient  water to launch and we all left promptly at 1400 hours. High Water was going to be at 1540 hours. 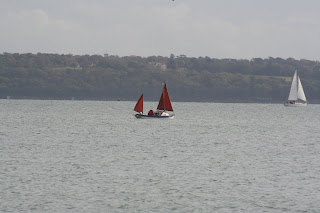 The wind was from the NW F4-5. The tidal stream was west going in the direction of our travel. We set off initally under jib and mizzen and we fell to the rear of our small fleet. We persisted until we passed the water intake of the Calshot Power Station. The conditions felt so benign that I decided to raise the mainsail with a reef and we picked up speed. Martin in "Nonsuch" seeing that we were gaining on him also decided to set a reefed main as well as his two other sails. 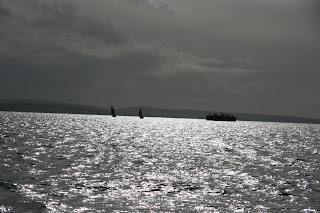 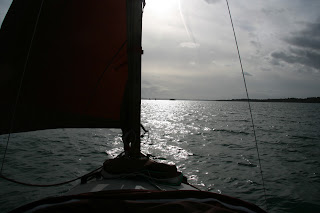 When we reached the entrance of the Bealieu River the wind had turned more westerly and was beginning to kick up a chop against the west going tide. The shallow Solent can produce a steep chop to the waves and for the next hour we began increasingly to fight heavy sea conditions. The wind speed increased and I was glad of the extra weight of my crew. In order to minimize the heeling effect I turned the boat towards the wind and bore away when I could to maintain progress. I was also glad that I had taken the precaution of putting in the bottom washboard and the top hatch in the companionway. The sea started to break over the top of the boat and on three occasions the boat heeled so much that we took water over the gunwale. The seawater was caught on the side bench and seemed to take an age to drain away through the scupper. On one occasion we shipped a couple of gallons onto the cockpit floor. Bill quickly pumped out all he could.

At one point we caught in irons head to wind and we started to be blown backwards. Bill had the presence of mind to release the mizzen sheet as that sail was keeping us head to wind. We continued to make progress to windward although at times we were spilling wind out of the sails as we were probably over canvassed. The conditions did not make it easy for us to reduce sail and we carried on. The sea conditions did moderate and we put in a couple of tacks to reach the outer marker of the Newtown Creek at about 1700 hours. The marker shot by at great speed and we were glad to reach the shelter of the river. Martin in "Nonsuch" came in shortly afterwards having experienced the same conditions but without the benefit of extra ballast from his crew. He had to heave to in order to reduce sail.

A trip which had given me greater confidence in the boat and the need to ensure that you match the sail area to the conditions. Also the need to keep the inside of the boat as water tight as possible.

That evening we stayed against the quayside and we made sure the boats came down safely onto the mud. We then walked to the local pub at Shalfleet for a good meal. We returned down the pitch black lane to find the boats 5 foot down against the wall.
http://www.thenew-inn.co.uk/index.htm 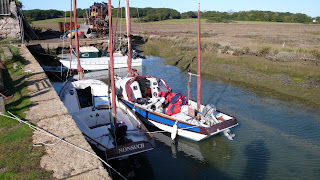 The return the next day was far simpler although the weather conditions were the same. The tide was with us and with the wind. The sea was smooth and we sailed with a reefed main. we returned to Ashlett in about 2 hours arriving back at about 1430 hours. 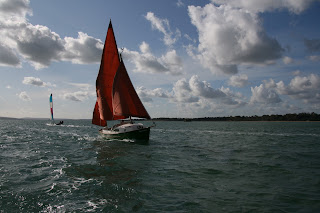 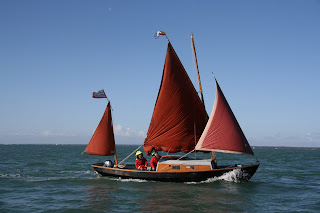 We recovered the boats back onto our trailers and we left for home. An excellent trip. 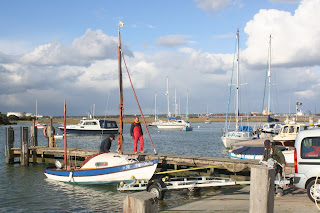