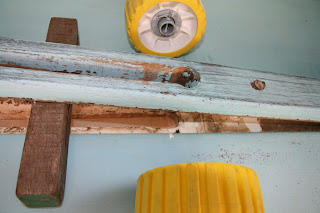 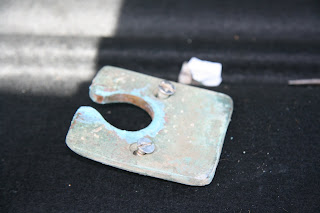 I flooded the interior of the boat with water and tipped it forward thinking that the leak was going to be in the bow are of the boat. What happened was that as the boat filled and reached the stern locker with the keel box that water started leaking out of the boat. It became clear that the problem was in the stern of the boat.

I carried out some research on the Drascombe forum and the NKDE (Dutch Drascombe website and I found the likely source of the problem.

The bottom rudder bearing is fixed to the GRP hull with 2 stainless steel wood screws. The assembly is covered by the keelplank.

It is common for damage to occur when the rudder is lowered through the trunking and the bottom bearing is hit by the rudder. The photograph shows that the bronze is bent and when it was removed the two crews were detached and loose. The keelplank was keeping the bearing in place.

The second photograph shows that the GRP around the screw holes was cracked and broken and that the fissures went right through the GRP structure around the rudder casing causing a leak. When I came to drill through there could not have been more than 2 or 3mm of GRP. I carried out a repair using 6mm screw bolts and an amount of expoy to seal the cracks on the underside and to surround the tops of the bolts and to strengthen the whole area. It will remain to seen whether it will remain leek free.